Getting paid crypto to play video games, exercise or meditate sounds pretty sweet, but how does it actually work?

The popularity of Play-to-Earn (P2E) games that reward crypto for simply playing video games has seen Web3 developers rapidly expand the space to offer crypto rewards for other lifestyle activities.

The most popular P2E games are those inspired by our favourite childhood games. Pokemon-inspired Axie Infinity, for example, where users build up a fierce collection of cute monsters called Axies that love to battle, build and hunt for treasure, had 2.7 million users at its peak.

Gods Unchained shares similarities with Yu-Gi-Oh!, where people fight other players using a deck of cards, with the more valuable cards directly linked to the success you experience in the game. The most valuable cards come at a premium price. ‘Citadel of the Gods’ made a whopping 42 ETH (or AU$96,600), making it the most expensive card sale in the game’s history. 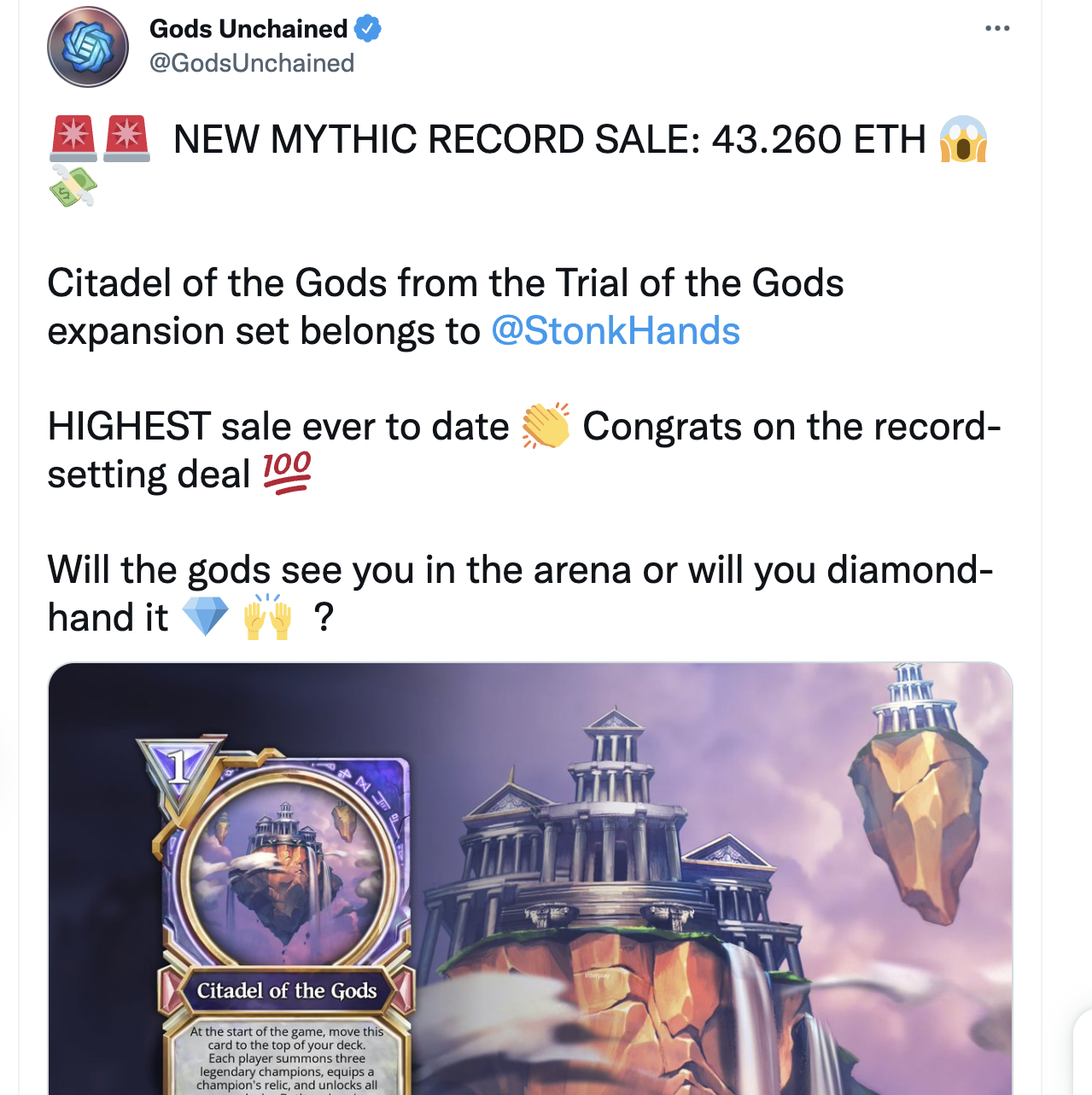 Apps are now offering crypto rewards for staying active through physical activity with Move-to-Earn (M2E) apps and meditation through meditate-to-earn apps, as well as education, sleeping, watching TV and even eating food through eat-to-earn. There is a growing list of what the future may bring for these applications.

How do to-earn crypto apps make a profit?

It’s reasonable to be sceptical about to-earn apps. Who would possibly pay users to do these simple activities and how do they make a profit themselves?

STEPN, a popular move-to-earn app that rewards users for exercising and moving outdoors, has been transparent about how they make their profit, stating on their website that they “take small taxes from in-app activities, such as NFT trading, shoe-minting and shoe-rental”.

STEPN outlines the tokenomics behind their move-to-earn app, saying that in order for STEPN “to do well, it has to be both profitable for established players and price-friendly for newer players”.

The tokenomics are determined by the developers of the crypto token, which refers to features such as the maximum supply of the token, the minting or burning process, transaction fees and incentives for token holders.

There are two types of tokenomic models: deflationary and inflationary. The main difference between the two is that deflationary has a hard cap on the number of tokens created, whereas the inflationary model has no hard cap, with the token supply increasing over time. Most cryptocurrency tokens are deflationary, as it is looked favourably upon by investors.

The price rises when the demand for the token increases, which will therefore decrease supply.  This creates an advantage for established players who will see their net worth increase. On the flipside, however, it will increase the barrier of entry for newer players as the price of the token increases.

M2E and P2E apps typically require users to make an initial investment purchasing an NFT.  STEPN, for example, requires users to purchase NFT sneakers to start getting rewarded for physical activity — another revenue generating activity for the app.

The main concern for many investors with do-to-earn apps is how much profit you generate from these apps, which is dependent on the popularity of the platform at the time of sale. The in-game rewards have no intrinsic value themselves. The rewards depend on the demand for items on the platform at that given time.

Immutable X, a blockchain platform that simplifies the creation of non-fungible token projects for developers, shared a diagram outlining how the tokenomics works for their projects. 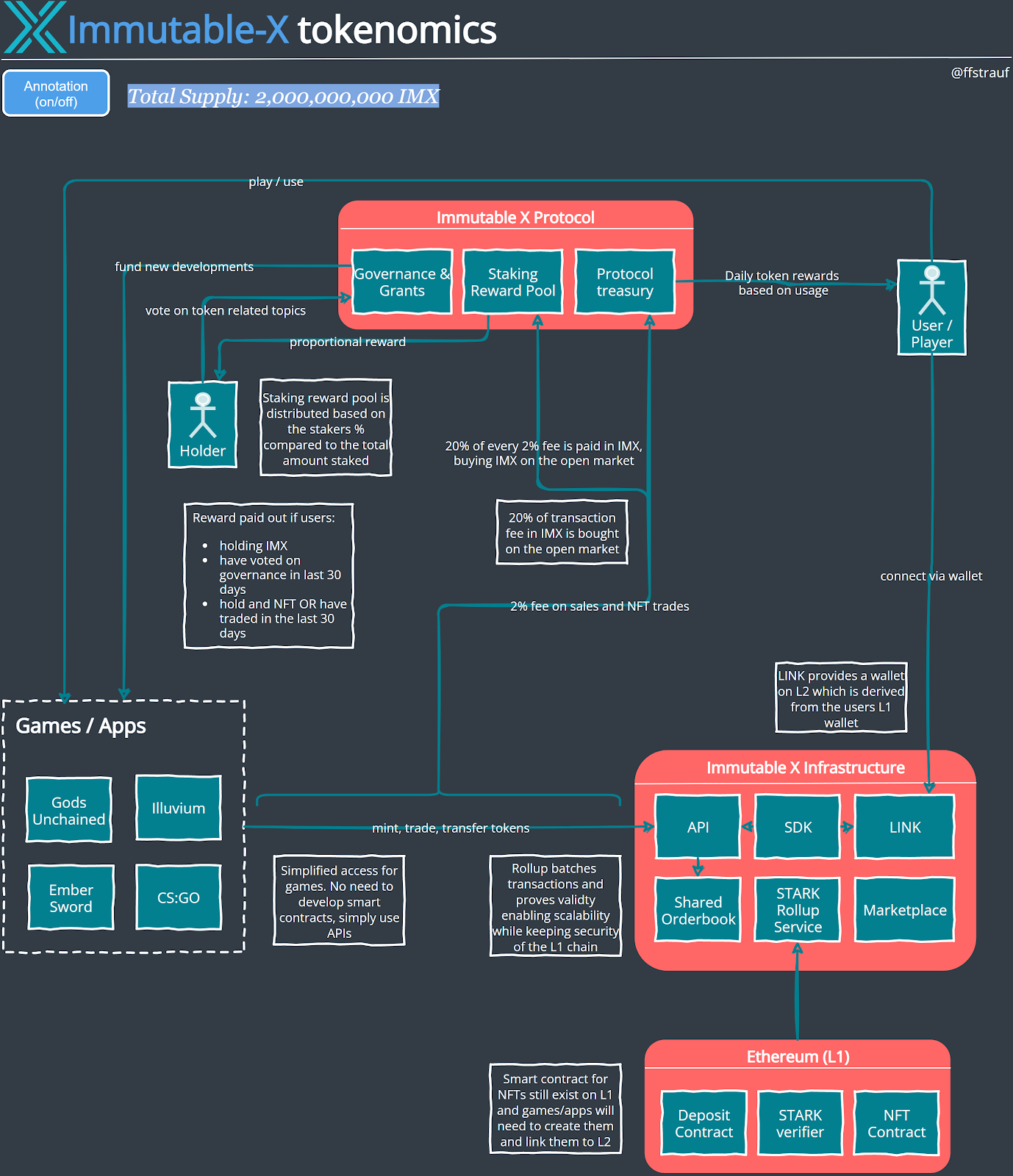 Models like meditate-to-earn are slightly different. Proof of Meditation, a popular meditate-to-earn app which won the EthDenver Hackathon 2021, has the option for users to sign up to a 21-day meditation challenge, with a compulsory initial $100 deposit. For each day that a user doesn’t meditate, $5 will be slashed from their deposit. If the user reaches 21 days of meditation, they will be rewarded with crypto out of the prize pool. The prize pool is funded by the slashed funds from those unsuccessful at completing the challenge.

Ryuuko Tsuka, a yet-to-be-launched meditate-to-earn app that promotes self-wellness and rewards users with USDC from completing wellness activities, briefly disclosed the project’s tokenomics on their website. The developers revealed that one billion tokens will be in circulation, but the whitepaper outlining the intricacies of the supply and demand, as well as the  developers’ vision, is yet to be released.

Learn-to-earn is a popular model in the Web3 space and is available on a range of major cryptocurrency exchanges. Users can get rewarded for watching cryptocurrency tutorials and passing quizzes on the subject afterwards.

These apps are designed to appeal towards beginner investors, who can get their first cryptocurrency holdings without their own investment and therefore understand the concept.

Learn-to-earn can also lead to job opportunities in the future. Popular platform Proof of Learn suggests that the program leads to jobs in the crypto space with three steps: earn rewards, launch ahead and build careers.

CryptoBots was arguably the first P2E game released in 2017. It allows users to collect and trade unique collectible bots with an aim to build the best ‘bot army’ in the world. Since then, we have seen the explosive growth of P2Es including Axie Infinity, Gods Unchained and Cryptokitties across emerging nations such as the Philippines and Venezuela.

The P2E concept didn’t just attract die-hard gamers who could now monetise their hours and hours on end. It provided an opportunity for those in developing countries who, for a short period, were able to earn more than the minimum wage in their own country.

According to gaming statistics platform Activeplayer.io, P2E provides benefits for those in developing countries, where “earning $15 a day is more than the average wage”.

Axie Infinity, one of the largest play-to-earn games inspired by Pokemon and Tamagotchi, has over 40% of its player base from the Philippines.

STEPN made a statement on their website addressing Ponzi scheme accusations towards the to-earn industry in early April this year. Ponzi schemes, which are types of investment fraud that pay existing investors with funds collected from new investors, rely on external money coming in. When that stops, the scheme collapses, leaving investors with lost funds.

STEPN stated the biggest clue to a to-do-earn being a Ponzi scheme is when the game is “simply not fun to play but advertises abnormally high returns”. Most games of this nature choose to lure users in through extremely high returns, compromising the quality of the game itself.

Money Smart describes Ponzi schemes as investment scams that “pay existing investors with funds collected from new investors” when the reality is “there is no real investment”. 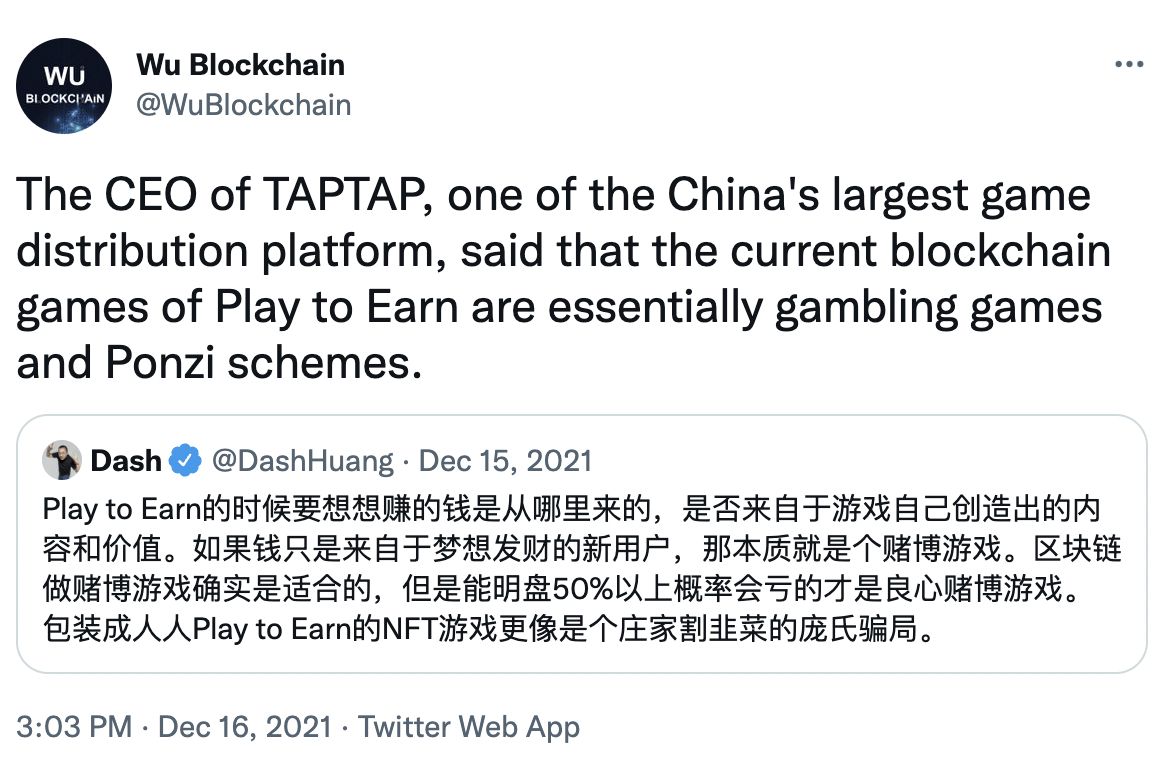 CEO of Chinese gaming platform TapTap Dash Huang took to Twitter to voice his disgust at play-to-earn games in December last year, tweeting for the community to “think about where the money comes from and whether it comes from the content and value created by the game itself. If the money just comes from new users dreaming of making a fortune, it’s essentially a gambling game. It is indeed suitable for the blockchain to be a gambling game, but a game of conscience is a gambling game that has a probability of losing more than 50%. An NFT game that packs P2E for adults is more like a ponzi scheme where the dealer cuts leeks.”

Background research is key to avoiding a Ponzi scheme. A good place to start with to-do-earn apps is downloading the project’s whitepaper on its official website. This is a document released by the project’s developers explaining its purpose, how it  works, and their vision and forecasts for the project. Essentially, it is a structured, strategic business plan.

It’s important to pay particularly close attention to the details surrounding the tokenomics of the project, such as the token lifecycle map outlining how the token is ‘brought to life’ and how incentivised users are to keep their reward tokens in the economy (through in-game purchases).  The second thing to look for in the whitepaper is the estimated future demand and supply of the token. This is important for investors to understand how profitable a token will be in the future.

If the whitepaper suggests guaranteed high returns or profits, you should avoid the project at all costs. That comes back to the old saying: if it’s too good to be true, it probably is.