Crypto garnered quite the dumpster fire reputation throughout this year for a myriad of reasons as mainstream headlines covered “disgraced” founders and “go-to-the-bin” scammers leaving many quite confused about wtf crypto is.

But despite bearish sentiment, major governments and institutions also started to recognise that digitising assets might make a hell of a lot of sense.

How did we get here?

Let’s go back to some core basics. Crypto emerged to provide a new monetary system in the midst of an increasingly volatile and inflationary economy.

The Bretton Woods monetary system was the first time money was backed by an IRL asset, known as the Gold Standard. But following the Vietnam War, when the US spent much more money than it had, the US government couldn’t honour withdrawals between money and gold, so ended the policy.

In the 70s, the US removed the gold standard and scored a deal with Saudi Arabia to price oil in USD. Through a range of military weapons and aid deals, the demand for USD increased, and set into motion the USD becoming the most in-demand asset in the world, influencing the rest of the world economy with it.

But as the Fed printed more money, it had a knock-on effect for literally the entire world, printing and updating policies whenever they wanted. See below the buying power of US$1 over time between 1800 to 2022. 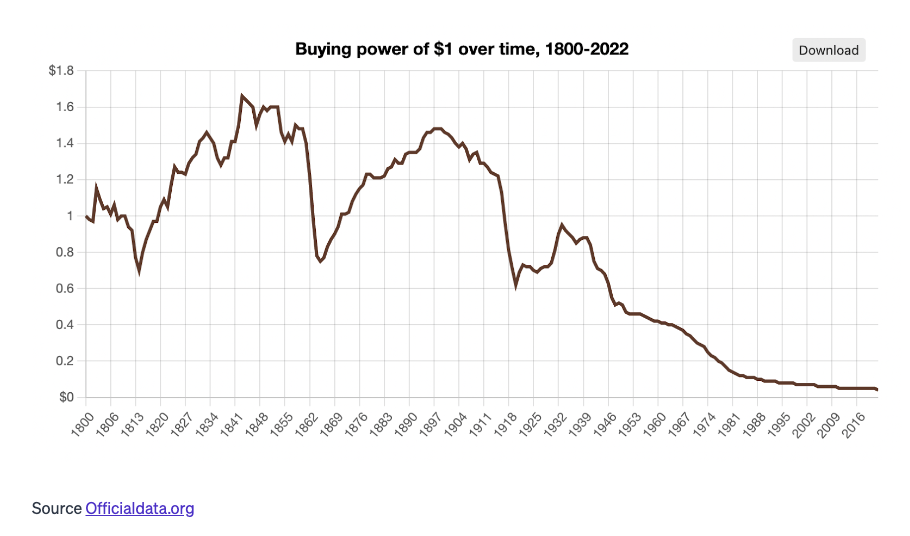 That’s how we got to Bitcoin: an asset with an in-built code featuring a policy that can never change, but it’s in no way an asset that can be considered stable.

So, stablecoins entered the world: the first class of crypto asset to provide a stable alternative to the fiat system. However, most stablecoins are backed by the USD, including USDT and UCDC, providing not much more than a digital hedge with faster settlement, aligned with an asset inflating and declining in value.

For lesser developed countries with consumer price index (CPI) inflation levels hitting 88% in October this year and projections that it’s set to further increase in 2023, not-so-stablecoins pegged to USD still provide a better solution than their own national dollars.

Tokenised assets: not pegged to the dollar

Enter real-world asset (RWA) tokenisation. Cryptocurrencies aren’t exactly the most comprehendable new technological innovation, but the tokenisation of an asset — the process of converting the ownership of a real-world asset like land, gold, or property rights into a digital token — is, and is garnering attention from governments and major institutions.

From precious metals to real estate and physical art, investors are now purchasing the rights to IRL assets to act as hedges against inflation, create new tools for more stable investment, while eliminating issues or storage and transport, reducing unnecessary parties in between. Tokenisation makes access cheaper, while providing transparent trails of ownership. Here are the top areas where major players have been paying attention this year.

The carbon credit market popped off this year as companies, governments and individuals looked for new ways to offset their carbon emissions and reach environmental, sustainable and governance (ESG) goals. 2022 saw a 400% increase in the trade of carbon credits, which consequently led to a global shortage.

But carbon markets have so far been scattered, existing in siloed systems, causing double-counting when multiple countries or companies count the same carbon credit as their own offset.

Since emerging as a solution to driving financial capital to environmental degradation from the Paris Climate Agreement, the tokenisation of carbon credits has helped provide more transparency of transactions and record-keeping, but there’s still a way to go in creating mutual standards and aggregating data. With more companies looking towards Ethereum Virtual Machine (EVM) compatibility, we finally have a path towards utilising compatible tooling to better aggregate the information together.

And as the availability of carbon credit tokens declines, the demand for new projects that can tokenise proof of carbon emissions reductions will rise, opening new avenues for carbon sequestration projects throughout 2023 and beyond.

Tokenising commodities like gold and silver is now allowing investors to securely trade the whole or a fraction of the commodity. Proof-of-origin can be traced, along with transportation, processing and ownership details. Commodity tokenisation also makes these assets much more liquid, as investors can move in and out of their hedges quicker.

Funds like VanEck, which holds more than US$52 billion assets under management, believe more than US$25 billion in off-chain assets could be tokenised on blockchains in 2023 which will help simplify custody and settlement and reduce costs.

The IMF recently shared that utilising decentralised finance to tokenise instruments like securities, stocks and bonds is far more cost efficient compared to traditional financial systems in both developing and emerging markets.

VanEck predicts that the tokenisation of sovereign debt will be a key trend throughout 2023, with governments like Brazil stating they are already moving towards a tokenised economy to extract value from IRL assets to open opportunities for growth.

More niche crypto companies like MakerDAO are planning to deploy US$1 billion into government securities with the help of BlackRock and Coinbase, while digital asset companies like Securitize Capital have shared they will tokenise KKR’s Health Care Strategic Growth Fund II on the blockchain, driving a new investment tool into the private equity market.

According to the Boston Consulting Group, more than US$16.1 trillion illiquid assets could be tokenised by 2030.