Blockchain technology made mostly bleak headlines across 2022, with mainstream media frothing over the doom and gloom of the industry’s bad guys (as they should). As with every emerging technological innovation full of busts and booms, blockchain adoption and development of the tech continued, with nearly every country across the globe paying attention and paying big bucks to implement new trials to digitise century-old systems.

The blockchain industry remains projected to grow at a compounding annual growth rate of 85% between 2022 to 2030, according to Grand View Research. 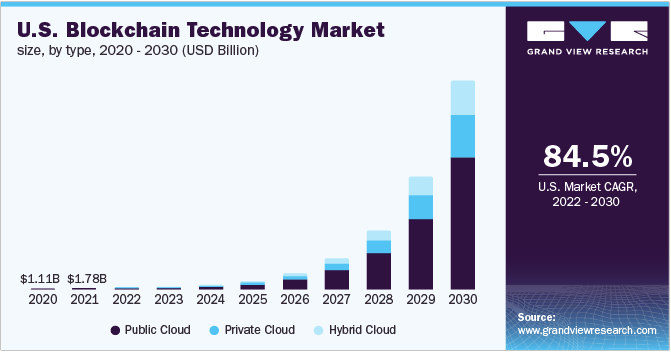 According to PwC, the industry will raise total global gross domestic product (GDP – the measurement of monetary value of goods and services purchased by a country’s citizens in a period of time). It counts all of the output generated within the borders of a country by US$1.7 trillion and add around 40 million jobs, and nine out of 10 governments plan to invest.

So where we at? A (very) little history lesson.

It’s important to look at where we are in the timeline of blockchain development to better understand what’s next for its development, particularly as more governments build with these new technologies.

The history of open-source technologies started way back in 1960, when the first freely distributed software with source code became available. In the 1970s, the trend died, with proprietary software taking the limelight in the form of major for-profit players like Microsoft and Apple.

In the 1980s, the Free Software Movement realigned with the 1960s mission, allowing computer uses to replace proprietary software with free software (under strict licenses) with a goal to “liberate everyone in cyberspace“.

Moving forward to the 2000s, the Linux Foundation became one of the largest open-source foundations, while the Python Software Foundation led with a commitment to develop Python in the open.

In 2008, GitHub was born, creating a central platform for source code development, at the same time that Google released the first version of Android.

Today, blockchain technology is fast-tracking innovation in open-source infrastructure that relies on wider community consensus that has skyrocketed in popularity in response to the centralised infrastructure of the current web. However, it is important to note that these developments remain mostly at the infrastructure level, as blockchain computing requires intense collaboration, and trials and tests to get it right.

So which governments are adopting blockchain technology?

El Salvador President Nayib Bukele publicised the adoption of Bitcoin as legal tender in 2021, and we’ve seen more countries follow suite this year. While his decision has been heralded as a “poor investment choice” since the significant drop in the assets’ value, we’re seeing more countries choose to accept cryptocurrency as a form of legal payment with proponents arguing that it will lower commission costs for the billions of dollars sent home from abroad, and a way to remove reliance and dependence on foreign currencies like the USD.

Remittances amounted to almost 23% of El Salvador’s gross domestic product in 2020, but surveys show that the national wallet, the Chivo Wallet, has only been adopted by 20% of the population so far based on a national survey.

In April, the Central African Republic (CAR) became the second country to adopt Bitcoin as legal tender which was voted unanimously in favour by the government. Bitcoin will be considered tender alongside the regional Central African CFA franc.

The World Bank states that five million individuals from the CAR, or 71%, live below the poverty line. The country aims to accept crypto as tender to reduce reliance on former colonies and financial institutions that ruled them in the past, arguing that international economic policy is decided by the wealthiest countries in favour of their political interests.

In Brazil, cryptocurrencies were legalised as a means of payment, but is not yet legal tender. Digital currencies and air mileage programs will be supervised by the Brazilian central bank.

Ukraine passed a law this year that will create a legal framework for crypto allowing foreign and Ukraine exchanges to operate legally, according to the Ukrainian Ministry of Digital Transformation. The Ukraine National Securities and Stock Market Commission will regulate the market, issue licenses to crypto businesses and provide state policy for the industry.

Governments are eyeing blockchain technology to reduce siloes and create more trusted data systems that can’t be altered by individual parties. From climate change to plastic recycling, these issues go beyond the national, which is why the Singapore Government is now working with the World Bank under the new initiative, the Climate Action Data Trust (CADT).

Created by the International Emissions Trading Association, the project will connect with major registries to reduce siloes of complex, but high demand, carbon credit markets. Carbon credits saw so much demand in 2022 that the carbon credit surplus has begun to run out as corporations, governments and individuals seek new avenues for purchasing carbon credits as a direct channel to invest in carbon sequestration and reduce their carbon footprints.

In Alberta, Canada, one of the largest chemical manufacturers in the world, BASF, is working with the Canadian government to bring together plastic value chain players for circular tracking and sorting of recycled plastics.

The program is a result of successful pilot program in Brazil and British Columbia. According to the government of Canada, Canadians toss away three million tons of waste, and only 10% is recycled.

This year, the Monetary Authority of Singapore completed its first cross-currency transaction involving tokenised Japanese yen and the Singapore dollar, buying and selling tokenised government bonds in a move to explore DeFi applications in traditional markets.

Singapore is also teaming up with Open Government Products, experimenting with the Government Technology Agency of Singapore to roll out a pilot for purpose-bound money-based vouchers.

Institutions like Black Rock are looking towards the tokenisation of securities, stocks, bonds and alternative assets, including wine, art and real estate, while funds like VanEck with US$52 billion assets under management predict that the tokenisation of sovereign debt will be a trend in 2023 for debt alleviation.

Beyond tax and financial services, countries like India are innovating with welfare systems for those from lesser developed regions and underrepresented communities. This year, India issued blockchain “caste certificates” to 65,000 tribal communities to stop fraudulent claims on government benefits.

Shubham Gupta, a 28-year-old officer of the Indian Administrative Services, encountered fraudulent players and a politician who managed to acquire tribal land by presenting himself as a tribal member with a fake caste certificate to access government benefits, and developed the idea around blockchain adoption-based system.

In Australia, the National Disability Insurance Scheme (NDIS) has been trialling blockchain to reduce laundering and fraudulent welfare payments, successfully recovering more than $10 million from criminal rings rorting the system.

The adoption of CBDCs

CBDCs are a contentious debate, but that doesn’t mean countries aren’t slowing down in trialling and testing new methods for programmable money. More than 100 countries are exploring CBDCs, which represent more than 95% of global GDP.

India and Thailand are at advanced stages of their pilots, with India’s central bank stating it would carry the same attributes of physical cash and could be converted into other forms of money.

Malaysia and Singapore have started proof-of-concepts, while Australia announced a pilot in August. The key goal for governments is to create more advanced payments and settlement system, maintaining smoother interactions with financial market infrastructure and upgrading cross-border applications.

CBDC developments can be tracked here.